Did you know the glass ceiling costs organizations billions of dollars a year in lost opportunities and performance? Study after study has shown that companies with strong female leadership generate a 10 percent return on equity per year. Another study found that for profitable firms, a move from no female leaders to 30 percent representation increased net revenue margin by 15 percent.

I was thrilled when I was asked to help promote Nancy E. Paron’s new book Fresh Insights to End the Glass Ceiling.

In 1987, the book Breaking the Glass Ceiling (Basic Books) suggested, “Many women have paid their dues, even a premium, for a chance at a top position, only to find a glass ceiling between them and their goal. The glass ceiling is not simply a barrier for an individual, based on the person’s inability to handle a higher-level job. Rather, the glass ceiling applies to women as a group who are kept from advancing higher because they are women.” Here America stands three decades later, with only 14 percent of the top five leadership positions at S&P 500 companies held by women. Nancy has channeled her passion for effective leadership and corporate development into her new book as a solution for women–and for companies.

Fresh Insights to End the Glass Ceiling answers many important questions at this critical juncture in corporate America:

Nancy’s book launch has also been an adventure. I will let her share her story below….

Timing can be more important than we like to think it is in our lives.  We have all experienced the best laid plans destroyed instantaneously by events outside of our control.  On the other hand, most of us have also had unexpected luck or a sudden turn of events bless us when we least expected it.  What is most important, is how we respond to these unexpected and unplanned moments.

Some of my most profound experiences happened with peculiar timing that tipped the course of my future.  My HR career began in 1979 after I saw a job posting in an obscure hallway on the last day one could apply for the position.  I got the job.   In a similar happenstance of peculiar timing, my future husband, picked me up for a business lunch at the same time as two dozen beautiful red roses were delivered for me in the lobby from a former boyfriend who was a florist.  I couldn’t have planned that better had I tried.  Before moving to Sugar Land, TX, for several years, I tried and tried to reach groups who might want to join us in the “Vets Coaching Vets” initiative and was ignored.  I couldn’t get a response.  Then the first person I reached out to at Lone Star Veterans Association in Houston said, “Yes, let’s do this!”  Again, timing.

More timing.  My new researched based book, “Fresh Insights to End the Glass Ceiling” had been set for several months to release on Tuesday, August 29, 2017.  Then, just weeks before the launch, another fortuitous event appeared in the news.  A Google software engineer wrote his carefully crafted vivid manifesto about women, gender disparity and he challenged the company’s diversity policies.  That situation did not end well, leaving the gender issue to be a tinder box of emotions, disconnects and disagreements. While this was a difficult matter for those involved at Google, it was great timing for my book. The book discloses the true reasons why the glass ceiling exists and it is not what most people think (including Google.) With this knowledge offered through our research findings, the gender blame game can be eliminated and organizations can move forward with tangible solutions that will work.

As the book launch moved closer, I knew our August 29th date was rubbing a little close to the Labor Day Weekend.  I thought that the start of a new school year was good timing to welcome fresh thinking.   However, I never expected to butt heads with Harvey.  At the precise time my book released, my husband and I were, like thousands of other Houstonians, trapped by rising waters and unable to leave our home.  On the day before my book launch, a boat of young kind-hearted volunteers came to our door to evacuate us and we stayed because we have a two-story home and three dogs. Our area had never flooded before but with 40.5 inches of rain in three days and two lakes converging on our property, Harvey seized the moment.

Most importantly, Harvey’s timing and duration of hanging around far too long, changed history for national disasters, the Houston area and the nation.  It is too soon to know the extent of damage, but tens of thousands remain homeless.  Some lost their lives.  Everyone was impacted – themselves, their families, friends and businesses.

Never in my life have I witnessed such a spirit of helpfulness, care and love.  People from here and everywhere risked their lives, resources and time to pitch in and help.  They are still doing so and it is profound to experience. If you think we are a divided nation, one only needs to visit Houston to understand the goodness of the people.

So, briefly – back to my book launch.  You could say it was capsized or thrown off course for a bit.  Despite Harvey, even with floods at our doorstep, I went forward with quite a few radio interviews since we still had power.  In fact, national radio hosts were getting two interviews for one:  being inside the hurricane zone and a book with new insights to fix an old problem.

We will re-launch and are rescheduling some of our activities that were impacted.  However, “Fresh Insights to END the Glass Ceiling” is up and running and available now on Amazon.  The feedback from early reviews have been blushingly remarkable.

Timing has its way if giving us ups and downs and can throw us off course.  Two things I’ve learned to do over the course of my life and especially as the CEO of my company while raising four (now adult) children:  get up, dust yourself off and find the sunny side.  There is always a sunny side. 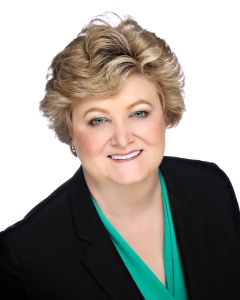 Nancy E. Parsons is one of today’s foremost experts in combining the science of assessments with the art of developing people. Parsons co-developed the CDR 3-Dimensional Assessment Suite®, which has been used to coach leaders around the globe for nearly two decades. She is president of CDR Assessment Group and specializes in cutting-edge psychological assessments for executive coaching, Authentic Leadership Workshops, team development, and succession planning and selection. In addition, Parsons serves on the leadership team of The Alexcel Group, an international consortium of executive-development experts. Follow Nancy on Twitter, Facebook, and LinkedIn. 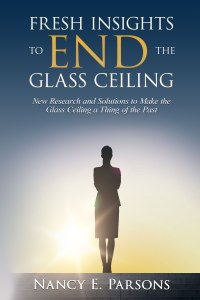 Fresh Insights to END the Glass Ceiling reveals the true reasons why the glass ceiling exists and it is not what most people think. That is why today’s solutions are not working. Equipped with the new insights in this book, we can at last make the glass ceiling a thing of the past.

Most companies have positive intent and are making significant investments in initiatives to accelerate promotional opportunities for women. Yet, progress has stalled. Even though it has been nearly four decades since the Pregnancy Act of 1978 went into effect, only 5.8% of CEOs of Fortune 500s are women and only about 14% serve as corporate executives. Meanwhile, nearly 60% of today’s college graduates are women. These numbers simply do not add up. Parsons explains in this new book that if we stay on the current trajectory, it will take over 400 years for women to attain just 50% of the CEO positions of Fortune 500s. Clearly, this is not acceptable.

From a bottom line perspective, a study conducted by the Peterson Institute for Global Economics of 22,000 organizations found that companies that had at least 30% of senior leaders as women had 15% increased profitability. So, the need to bring the glass ceiling down swiftly is more than a gender issue, it is a bottom line business success issue.

With quizzes to test knowledge about the glass ceiling, and an eye toward breaking the long-held myths about women in leadership, Parsons shares both new research and new solutions. It includes action plans for c-suite/executives, interest groups, talent-development professionals and individuals (both women and men) so that the glass ceiling may be shattered once and for all.

I highly recommend that you pick up a copy of this book today!